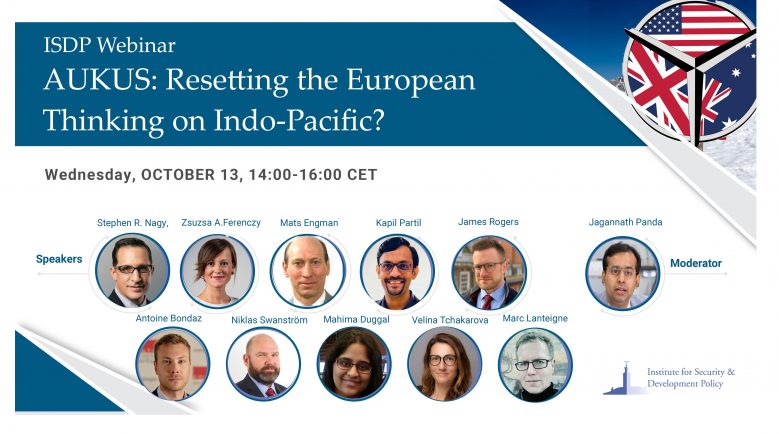 ISDP Webinar on AUKUS: Resetting the European Thinking on Indo-Pacific?

The signing of the recent security partnership between Australia-United Kingdom-United States (AUKUS) has theoretically followed the trend of mini-lateralism in the Indo-Pacific. However, the debate concerning the AUKUS –mainly due to its overt recognition as a ‘security pact’ –has led to questions regarding its strategic necessity and value-addition to the Quad process in Indo-Pacific which is broadly viewed as the guiding forum for democratic states’ interests in the region. Besides, the AUKUS has also created a strong wave of reaction from France, creating a lot of doubts among the European strategic community. In a way, this has created a context where most of the mainstream European countries are perhaps rethinking and revisiting their conventional approach and outlook towards the Indo-Pacific. To what extent the AUKUS is resetting the European emerging outlook towards Indo-Pacific? This webinar is aimed at analyzing the significance of the AUKUS and its strategic fallout, and draw the future implications for Europe and the region at large. It brings together some of the leading strategic experts in Europe and Asia to discuss the issue.

Did you miss the webinar? Watch the online recording here