Moscow and China-India Relations: Understanding the Complexities beyond Eurasia 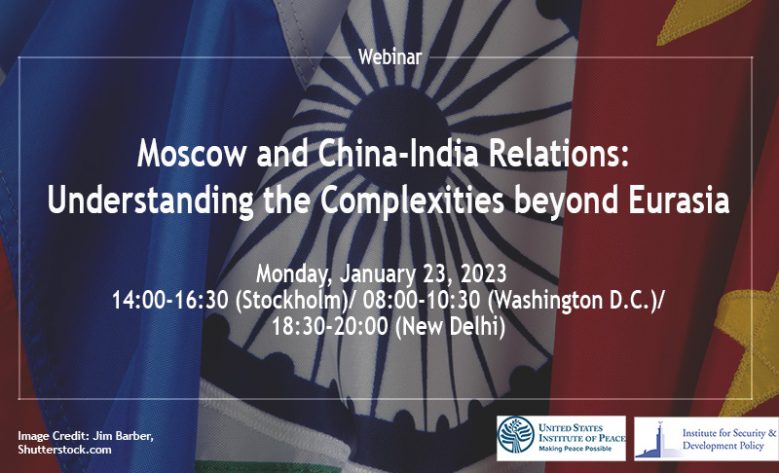 Did you miss this webinar? The full recording is available on ISDP’s YouTube channel.

The trilateral grouping of Russia, India and China (RIC) has for long been one of the most significant frameworks bringing together three of Eurasia’s biggest economies. Owing to its traditional partnership with India and the ideological partnership/friendship with China, Moscow has maneuvered RIC in order to ensure hope of Eurasian unity against the West. Such a role has served Moscow well. Russia has always sought to ensure that India and China remain engaged in the RIC dialogue, even as calls of the mechanism becoming outdated have emerged.

Russia’s RIC focus has allowed it to maintain relevance in other multilateral platforms as well such as the Shanghai Cooperation Organisation (SCO), Brazil-Russia-India-China-South Africa (BRICS) and the Asian Infrastructure Investment Bank (AIIB) as here, stable India-China ties have worked in Moscow’s favor. Importantly, as opposed to China, India has emerged as a more critical partner multilaterally allowing Moscow a range of opportunities with the rest of the world and especially the West. China’s own rivalry with the United States (U.S.) has limited this support that it could have otherwise extended to Moscow. For India, beyond their traditional defense partnership, Russia has emerged as critical to its ‘Connect Central Asia’ plan, especially as Chinese footprint in the region has continued to extensively grow. Owing to this complementarity, India’s active presence in the RIC has remained, even as Delhi’s ties with China have taken hits. This webinar brings together experts from China, India, and Russia to discuss the complexities of China-India-Russia trilateral. It would also aim to examine to what extent Russia plays a significant role in influencing China-India relations, bilaterally and regionally.

Objectively, this webinar will broadly address the following questions in particular:

1. How will Russia influence the future China-India relations, particularly within forums such as the Brazil-Russia-India-China-South Africa (BRICS), Russia-India-China (RIC), Shanghai Cooperation Organization (SCO) and the Asian Infrastructure Investment Bank (AIIB), where all three states are major stakeholders and fellow members?

2. How has Russia, and the Russia-Ukraine war, played a role in India-China dynamics? What are Moscow’s underlying objectives in the region, and how do New Delhi and Beijing fit into its regional and global calculus?

3. Does Moscow have a role to play in the India-China boundary dispute or negotiations? How will Delhi and Beijing’s changing dynamics with Russia impact the future of their border dispute?

This event will be moderated by Dr. Jagannath Panda, Head of the Stockholm Center for South Asian and Indo-Pacific Affairs (SCSA-IPA) at the ISDP.

Here you can find the detailed program of the webinar. Dr. Daniel Markey is a senior advisor on South Asia at the United States Institute of Peace. He is also a senior fellow at the Hohn Hopkins University’s School of Advanced International Studies (SAIS) Foreign Policy Institute. From 2007-2015, Dr. Markey was a senior fellow for India, Pakistan, and South Asia at the Council on Foreign Relations. From 2003 to 2007, Dr. Markey was a member of the U.S. State Department’s Policy Planning Staff. His work focused on U.S. strategy in South Asia, especially Pakistan and India. Professor Alka Acharya is the Chairperson of the Centre for East Asian Studies at School of International Studies, Jawaharlal Nehru University (JNU), New Delhi, and Honorary Director of the Institute of Chinese Studies, New Delhi. Prof. Acharya was nominated by the Indian government as a member of the India-China Eminent Persons Group (2006-2008) and member of the National Security Advisory Board of the Government of India for two terms (2006-2008) and (2011-2012). She authored the book ”China & India: Politics of Incremental Engagement”, published in 2008 and most recently edited a volume titled ”Boundaries and Borderlands: Hundred Years after the Simla Convention”, (Routledge, 2023). Her current research focuses on India-China-Russia Trilateral Cooperation and the Chinese strategic response to the post-cold war Asian regional architecture.

Dr. Hu Shisheng is a Senior Research Fellow and the Director of the Institute for South Asia Studies at the China Institutes of Contemporary International Relations (CICIR), Beijing. His most recent research focuses on South Asia, particularly India, Pakistan and Afghanistan security issues. Hu did his PhD in International Politics & Relations with a focus in Ethnic and Religious issues from CICIR in 2006. In 2004 he was a Visiting Scholar at Johns Hopkins’ School of Advanced International Studies (SAIS). Dr. Petr Topychkanov is an Associate Senior Researcher in the SIPRI Weapons of Mass Destruction Program. Petr works on issues related to nuclear nonproliferation, disarmament, arms control, and the impact of new technologies on strategic stability. Petr holds the position of Senior Researcher at the Center for International Security at the Primakov National Research Institute of World Economy and International Relations of the Russian Academy of Sciences. He is an Assistant Professor at the School of World Politics of the Lomonosov Moscow State University. From 2006 to 2017, Petr Topychkanov was a research fellow at the Carnegie Moscow Center’s Nonproliferation Program. Dr. Zeng Xiangyu is an Associate Professor and Research/International Coordinator at the Institute of South Asian Studies, Sichuan University, as well as head for the Indian Ocean Studies Program. With a special interest in South Asian Security & Diplomatic Studies, Dr. Zeng has been entrusted with research programs such as Maritime Security Strategy of India: Implications to China (national social sciences program), Terrorism and extremism in South Asia: Implications to BRI (Sub-program for MOE major research program), etc. Mr. Radomir Romanov is a Member of the inter–regional public organization “China-Russia Friendship Association”. He is an Editor and publisher current affairs program for Global Memory Hole App, International News Aggregator & Historical Database “Newsography.com”. He is also a Resident expert Organisation at the Research on China & Asia (ORCA) in New Delhi.

Panel 2: The Essence of China-India-Russia Trilateral Dr. Anna Kireeva is an Associate Professor at the Department of Asian and African Studies and a Research Fellow at the Center for Comprehensive Chinese Studies and Regional Projects of the Moscow State Institute of International Relations (MGIMO University), Russia. She specializes on international relations and security in East Asia and the Indo-Pacific, the strategy and foreign policy of major powers: the U.S., China, Japan and Russia as well as India as an emerging power. Her recent focus has been on Russia’s Asian policy and Russia’s relations with Japan, China, the Korean Peninsula and Asia in general. Dr. Zhang Jiadong is a Professor of International Relations, and the Director of the Center for South Asia Studies, and a Senior Researcher at the Center for American Studies, Fudan University. His areas of research specialization are China-US-India relations, South Asian issues, and anti terrorism issues. He is also the vice–chairperson of the Shanghai Institute for International Strategic Studies, and the vice chairperson of the China Association for South Asian Studies. He is a former diplomat at China’s Embassy in New Delhi, India (2013-2015) where he served as a second secretary. Dr. Artyom Alexeevich Garin completed his PhD at the Centre for Southeast Asia, Australia and Oceania (Institute of Oriental Studies of the Russian Academy of Sciences). He conducts research in the fields of Asia-Pacific multilateralism, Australia-China relations and Eurasian integration. His academic interests also include defense and aid policies of Australia, as well as politics, history and strategies of the Small Island Developing States. Dr. Archana Upadhyay is a Professor and the Chairperson at the Centre for Russian & Central Asian Studies, School of International Studies, Jawaharlal Nehru University, New Delhi, India. Her latest research work focuses on religion in Post-Soviet societies. Her most recent publication is a volume on “Hundred Years of the Russian Revolution: Its Legacies in Perspective” (Palgrave Macmillan 2021 (Co-edited) and “Transitions in Post -Soviet Eurasia: Identity, Politics and Strategic Choices” (Routledge 2021). Dr. Jagannath Panda is the Head of the Stockholm Center for South Asian and Indo-Pacific Affairs at the Institute for Security and Development Policy. Dr. Panda is also a Senior Fellow at The Hague Centre for Strategic Studies (HCSS), The Netherlands. Dr. Panda has testified to the US-China Economic and Security Review Commission at the U.S. Congress on ‘China and South Asia’, and is a senior expert on China, East Asia and the Indo-Pacific affairs.