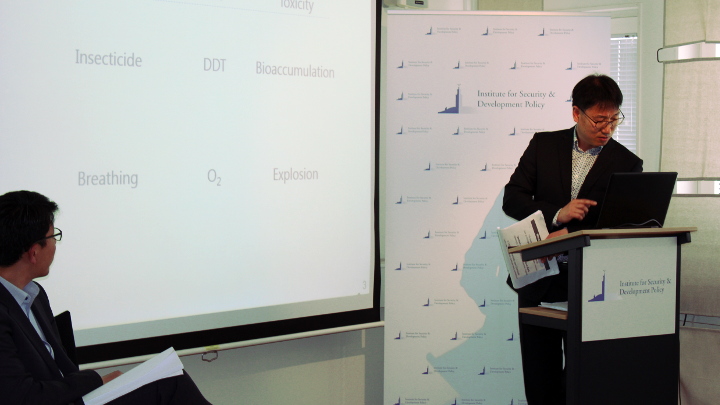 Mr. Kim started by presenting the Eurasian Initiative, a program of the Park administration which Moon seems intentioned to continue. The plan consists in: 1) connecting the Eurasian transport network using mostly existing railway networks; 2) connecting the energy network (electricity, gas and oil pipes) of the region; and, 3) creating a “Single Eurasian Market”. Currently, however, South Korea is a virtual island separated from the Eurasian continent by North Korea. In the short term, Mr. Kim argued, South Korea needs to find ways to connect to the continent by bypassing North Korea, but in the long term, the Eurasian Initiative can become a tacit unification policy toward North Korea.

After the fall of the Soviet Union, various nations and international organizations have tried to revive the old silk road through many initiatives, such as the TRACECA, CAREC, the UNESCAP’s six intermodal corridors, and China’s Belt and Road Initiative. These previous attempts can be an important lesson, Mr. Kim argued, but there are important limitations in the case of Korea: first, the international cooperation of Korea suffers from setback due to the high geopolitical tensions; second, South Korea is not as rich as China, nor does it have the authority international organizations have. South Korea, Mr. Kim suggested, should increase its market orientation, competitiveness of the “land bridge” against the maritime route, harmonization of regulations, and should take into account all geopolitical considerations. Despite the many obstacles, Russia’s “Pivot to Asia” and China’s Belt and Road Initiative can be regarded as favorable conditions for South Korea.

Mr. Jung opened his presentation by explaining that there are 120 million chemical substances on Earth and that, under different circumstances, they can be either very useful or extremely dangerous. Mr. Jung then illustrated a series of accidents involving hazardous chemicals, showing that they can have either a direct impact, or affect us through the products we use, the environment, or even through different generations. Policy strategies to prevent such disasters act at different levels: first, hazardous chemicals are identified and restricted; second, regulations on certain products are created; third, the market should be monitored and transparency of information should be ensured.

In South Korea, Mr. Jung argued, there are problems at every level: toxicity often goes unreported, too many different regulations cover different categories of products and often neglect some products that are not easily categorizable, market monitoring is not very efficient. The European Union, on the other hand, presents a benchmark in that it offers a single regulation that covers all types of chemicals and concerns their registration, evaluation, authorization and restriction (Regulation EC 1907/2006). Mr. Jung offered four policy recommendations: first, suspected chemicals should be restricted for vulnerable people such as kids; second, small volume chemicals should be registered; third, toxicity data should be shared and trade of hazardous chemicals be well monitored; finally, transparent information on risky products should be ensured.

Check out a video of the event below!

ISDP thanks Woosuk Jung, Namgyun Kim and all participants and members of the audience for joining in the discussion.