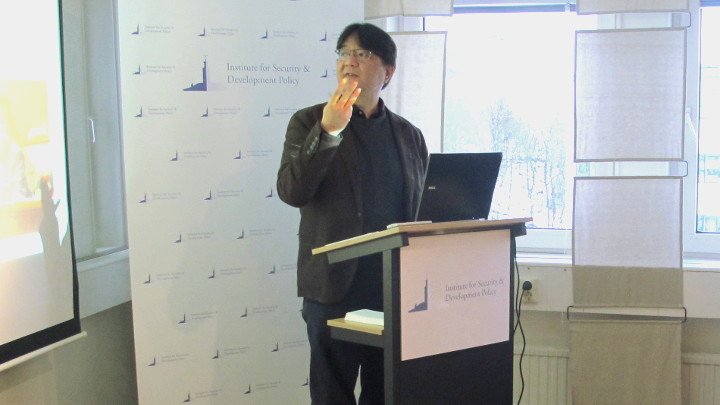 On February 22, 2017, the Institute for Security and Development Policy hosted a forum with Dr. Ildo Hwang, Research Fellow with the Institute 21 for Peace Studies, and a visiting researcher at ISDP, for a presentation on the evolution of North Korea’s nuclear strategy.

Dr. Hwang started his presentation by illustrating the main types of nuclear strategies. Deterrence can be by denial (based on war-fighting capabilities), by punishment (oriented at preventing war), symmetrical (resulting in a phased and thoughtful escalation), or asymmetrical (resulting in a prompt escalation to nuclear use). There is a tendency for nuclear strategies to shift from deterrence by punishment to deterrence by denial, as it happened for Pakistan and NATO. Possible factors affecting the choice of nuclear strategy include geopolitical circumstances, the strategic culture and the level of capability.

Dr. Hwang focused the second part of his presentation on the North Korean case, explaining how Pyongyang is inferior in terms of conventional capability, but it can count on an almost perfect portfolio of ballistic missile ranges and various miniaturized and standardized warheads. As far as its strategic culture is concerned, North Korea has a fundamental inclination towards punishment strategy since the anti-Japanese guerrilla activity in the early 20th century. Although Pyongyang’s announcements regarding its nuclear strategy have so far been inconsistent, it is possible to observe a shift from war prevention to war-fighting, stated Dr. Hwang. North Korea’s final goal is completing a full arsenal, and the evolution of its nuclear strategy is similar to the Pakistani deterrence model: asymmetric use of nuclear weapons, focusing on ROK-US military to prevent nuclear retaliation to the capital and using the threat of massive casualties as a leverage to seek an armistice. Similar to the situation between India and Pakistan after 1998, this is a stability-instability paradox: the probable damage decreases, but volatility increases and an arms-race in terms of tactical nuclear weapons (TNW) versus missile defense (MD) becomes inevitable, he stated.

The forum was concluded with a Q&A session, during which Dr. Hwang answered questions on the extent of North Korea’s cyber threat, the possibility to acknowledge North Korea as a nuclear state, and Pyongyang’s relations with Iran. ISDP wishes to thank all participants for contributing to an interesting discussion.