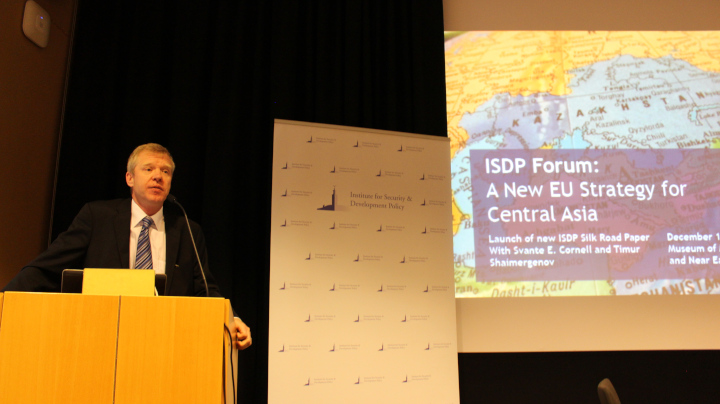 On the December 11, 2019, ISDP held a forum entitled “A New EU Strategy for Central Asia”, to  launch a new ISDP Silk Road Paper on the 2019 European Central Asia strategy, its implications, as well as public reactions to the document. The speakers were Dr. Svante E. Cornell, Director of ISDP´s Silk Road Studies Program, and Mr. Timur Shaimergenov, Chairman of the International Information Committee of the Ministry of Foreign Affairs of Kazakhstan. The panel was moderated by Dr. Lars Vargö, former Swedish Ambassador and Distinguished Fellow at ISDP.

The forum began with a short introduction by Dr. Cornell, thanking Mr. Shaimergenov and the Embassy of the Republic of Kazakhstan for their support of the event, and declaring a wish for future collaboration. He then started his presentation by providing an overview of the development of the EU and Central Asia´s relationship in recent decades and noted that the EU has not only been Kazakhstan´s largest trade partner, but also a powerful source of assistance for most Central Asian countries since their independence.

Dr. Cornell then proceeded to discuss Kazakhstan´s multi-vector foreign policy, which has, since its introduction by former President Nazarbayev in the 1990s, been adopted by the remaining Central Asian countries. The purpose of a multi-vector foreign policy for Central Asia is to, rather than attempt to diminish their connection to Russia which would prove diplomatically difficult, increase their relationship with other countries as a way to anchor their sovereignty.

Dr. Cornell noted three main reasons as to why the EU is choosing now to develop its engagement with Central Asia. The first is a continuing interest regarding Afghanistan, where many EU countries have military outposts, and therefore a vested interest in gaining a strategic leverage. The second is due to the expansion in the EU since the beginning of the century, to include countries that are geographically closer to Central Asia, and with whom they have a shared history under Soviet Russia. The third point regards the rise of China and the Belt and Road Initiative, which has made the area grow in importance geopolitically.

Commenting on the differences between the current European strategy as compared to previous ones, Dr. Cornell noted that the 2019 version has a more positive outlook, due to some recent developments in the region in the way of political reform, namely in Uzbekistan, and that the Central Asian countries are showing increased willingness to engage in trade relations compared to before. Furthermore, according to Dr. Cornell, a key accomplishment of this strategy is that with it the EU has managed to find a workable compromise between not antagonizing Central Asian countries, thereby compromising future collaboration, and keeping human rights as a key part of the agenda.

Subsequently, Dr. Cornell addressed two common criticisms to the EU strategy for Central Asia. The first, that the Central Asian countries should be approached independently rather than within a regional perspective, he rebuked by noting that alone the countries are far too low-priority for the EU, and referenced recent movements within Central Asia to increase collaboration within countries, which will likely validate the current plan of action. With regards to the second criticism, which states that the EU is being too lenient regarding the human rights situation in many of the Central Asian countries, he disagreed, noting instead that the EU is favouring a stable, incremental approach as a solution to the human-rights situation in Central Asia as opposed to enforcing quick changes that would not be sustainable in the long-run and that would quickly dissolve if relations with the West soured. He sustained this argument with examples, noting that carrot-and-stick politics have proven unsuccessful in the region, as was seen in the 1990s when the USA tried that method.

In conclusion, Dr. Cornell noted that Central Asia is no longer a backwater, but a region that is geographically significant and increasing in importance. However, he ended with an advertence, stating that in order for the EU strategy to work, the new High Representative for Foreign Affairs and Security Policy, Josep Borell, will have to keep up an ongoing interest in Central Asia, visit the region personally, and develop personal relations with state leaders, following in the footsteps of his predecessor, Federica Mogherini.

Following Dr. Cornell, Mr. Shaumergenov began his discussion on Kazazhstan´s role in connecting Eurasia. To start, he noted that while Central Asia still suffers persistent threats, such as instability stemming from Afghanistan, it has become an increasingly important area regarding both geopolitics and commerce.  Correspondingly, Central Asia´s method for handling Afghanistan has been by not only providing humanitarian initiatives, but also by encouraging trade.

Mr. Shaimergenov stated a belief that by increasing trade relations within Central Asian countries, they will increase their relations overall, as well as increase the wealth in the region. He noted several initiatives spearheaded with this purpose, such as the Astana International Financial Center which promises to attract more FDI to Central Asia, as well as neighbouring countries, and how countries are pushing for legislation intended to make Central Asia a safe environment for investments.

Mr. Shaimergenov then proceed to highlight how Kazakhstan has become in recent years a connectivity hub and increased in geographic importance as the physical bridge between Asia and China. He noted that the BRI is not only an opportunity for Kazakhstan and other Central Asian states to connect with China, thereby increasing their trade and wealth, but also that Europe should view these developments as an opportunity for enrichment as well.

Mr. Shaimergenov concluded by calling attention to Kazakhstan´s recent achievements, such as its GDP growth, and its stable government, as seen by the peaceful transition of power earlier this year between Kazakhstan´s first president since independence to his successor, Kassym-Jomart Tokayev.

The discussion that followed, moderated by Dr. Lars Vargö, followed a wide array of topics. These included how the US envisages the new European strategy on Central Asia; how Kazakhstan and the other Central Asian powers are using the BRI to export their own products; the need for political reforms to mirror reforms in infrastructure in order to make Central Asia a stable area to invest in; and to what extent the human rights situation in Central Asia will hinder political goodwill and investment in the region.

Finally, the morning´s closing statements came from the Ambassador Extraordinary of the Republic of Kazakhstan to the Kingdom of Sweden, Mr. Kairat Abdrakhmanov, who thanked all in attendance, and praised the progress that his country has gone through in recent years. He emphasized that Kazakhstan is a listening nation, that seeks to continue its dialogue with the European Union and continue improving itself. He finished by praising how the Central Asian countries are more united than ever before, and thanked the EU and Sweden for its engagement with the region.