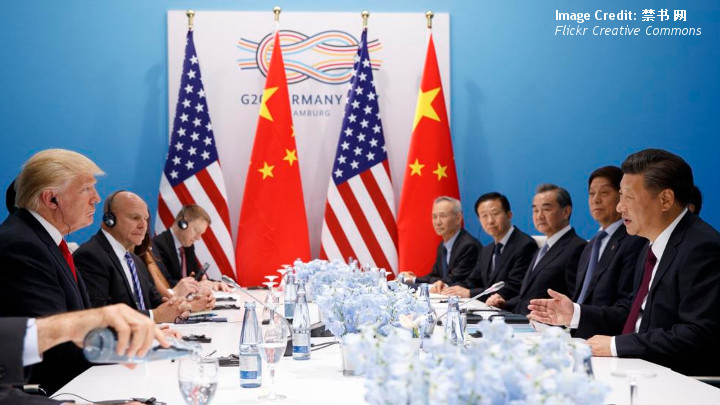 Following the National Security Strategy (NSS) released in December and Donald Trump’s recent statements at Davos, tensions between China and the U.S. have only increased. Is it already too late to fix relations? And what are the ultimate aims of Trump’s China Policy, if any?

The Trump administration is taking the U.S. in a new economic direction, the results of which have major global security concerns. Through a series of unclear agendas and controversial actions, the relationship between Beijing and Washington, one of the most important bilateral relations in today’s global order, is under even greater strain than previous years. This Focus Asia piece explores how the 2018 NSS and the inflammatory rhetoric from the Trump administration have caused friction between the U.S. and China.

Trump has a pessimistic view of U.S. China relations which has led to a shift in geo-political tactics. American foreign policy prior to 2001 focused prominently on integrating China into the international community. This changed, however, following Beijing’s emergence as a significant global power. It was Chinese economic prominence that led to President Obama’s 2011 pivot toward Asia, designed to counter China’s growing clout. Obama’s NSS (both in 2010 and 2015) involved a cautious embrace of China’s rise to prominence, attempting to develop Beijing into a strategic partner that did not pose a threat to the US-led Pacific Security Structure.

However, the Trump administration makes it clear that they believe this approach has failed, using evidence such as a resurgent Russia and China to back up these claims. In contrast to its predecessors the 2017 NSS has a clear Hobbesian outlook where countries are thought of as states competing for advantage against each other. The following text lifted from the NSS echoes this: “These competitions require the United States to rethink the policies of the past two decades—policies based on the assumption that engagement with rivals and their inclusion in international institutions and global commerce would turn them into benign actors and trustworthy partners. For the most part, this premise turned out to be false.”

Passages like this mark a clear departure from the Obama administration, making reference to China as a challenger to American power, influence, and interests, as well as a threat to American security and prosperity. Defining China as a revisionist power seeking to upend the international order of free trade, globalization, and human rights shows that a more forceful U.S. posture is being developed.

Washington’s belligerence on economic issues, was solidified by Wilbur Ross’ attack on Chinese protectionism and currency manipulation at the 2018 World Economic Forum in Davos. This was further reinforced following the launch of an investigation over intellectual property transfer requests by China, and the administration’s announcement of 30 percent tariffs on imported goods such as solar panels and washing machines.

This levy on tariffs was justified with the argument that “increased foreign imports of washers and solar cells and modules are a substantial cause of serious injury to domestic manufacturers.” While the tariffs apply to products imported from around the world, they are clearly part of a strategy targeted at China’s trade practices. Trump himself also openly warned that his country “will no longer turn a blind eye to unfair economic practices” of other nations. Statements such as these could be interpreted as a de facto declaration of trade war.

China’s Ministry of Commerce (MOFCOM) has called the hike in tariffs “an abuse of trade remedy measures.” And it is not just China that has spoken out against these measures, traditional allies of the U.S. such as South Korea have also been affected by the increase in export-import duties. South Korean Trade Minister Kim Hyun-chong characterized the measures as “excessive and a clear violation” of World Trade Organization rules.

The U.S. also plans to preserve its competitive advantage by prioritizing emerging technologies and set to reaffirm the long-standing commitment to market liberalization and economic ties, in contrast to the state-led direct investments offered by China. These measures, focused on explicit economic self-interest, and Trump’s America First policy, clearly represent the early implementation of the NSS.

The economic focus of the NSS assumes that a strong America at home will lead to a stronger America abroad. Whereas many commentators presumed, based on Trump’s campaign rhetoric, that Trump’s term of office would be characterized by a more protectionist U.S., the NSS argues for strong American international leadership, stating: “An America that is safe, prosperous, and free at home is an America with the strength, confidence, and will to lead abroad.” It continues, “we learned the difficult lesson that when America does not lead, malign actors fill the void to the dis- advantage of the United States.”

The NSS focuses strongly on preserving U.S. dominance through increased defense spending and an expansion in military cooperation with Asian allies. This will likely lead to a continuing escalation of U.S.-China tensions, particularly concerning the issue of North Korea. In fact, it was the conflict of words between Washington and Pyongyang from the summer of 2017 that spurred the initial change in tactics vis-à-vis China. The first few months of Trump’s presidency had featured dialogue between China and the U.S., culminating in the 2017 April trade agreement and Trump offering personal praise of President Xi. This praise, Washington’s eventual concessions over relations with Taiwan and its silence on the South China Sea were arguably an attempt to encourage Beijing to rein in the North Korean government.

However, China’s failure or inability to exert pressure on Pyongyang, the subsequent threats of nuclear war with North Korea, and Washington’s failure to gain significant benefits in the trade negotiations were followed by a strategic shift. Trump moved away from a conciliatory tone designed to encourage Xi to work together in limiting North Korea’s nuclear ambitions, towards a forceful American posture in the Asia Pacific, with threats of unilateral military action on China’s neighbor.

The American intelligence community’s inability to accurately predict North Korea’s nuclear and missile capability are the most likely factors for American pressure on China. This is further explained through the pressure from Congress to adopt a more forceful stance toward China, as a result of North Korea’s new capabilities and Beijing’s ever-expanding dominance on the international stage. Moreover, U.S. politicians are keen to avoid China taking advantage of the international perception of the current U.S. administration’s controversial and sometimes contradictory policy making. Already thanks to the announcements of budget cuts to, among others, the UN and the Environmental Protection Agency, China has been given space to paint itself as the defender of globalization and free trade as well as a global leader in tackling climate change.

Chinese and American relations can recover, particularly if Washington accepts that Beijing’s ability to reign in and influence North Korea is limited. Furthermore, the Trump administration must accept that China has an obvious interest in the Korean peninsula, which necessitates increased dialogue and a return to the U.S. administration’s initial willingness to negotiate with China, avoid unilateral action, and refrain from further escalating protectionist measures.

However, the balance of domestic politics, foreign policy objectives and trade will have to be carefully negotiated. Over the coming months, Washington is expected to increase competition in trade for high-tech industries, with a particular focus on China’s alleged intellectual property rights’ theft. The danger of such tactics is an unwanted escalation of hostility that could burn bridges between nations. What is at stake is not only current globalization norms, but also peace among major powers.

The international community would be wise to continue cooperating on international agreements separate to the U.S. and China, such as the revised TPP – the Comprehensive and Progressive Agreement for Trans-Pacific Partnership – as a way to maintain the current international order. The belief by many analysts is that a return to Obama-era engagement with Asian allies will be the long-term strategy post-Trump. Although the NSS is a far cry from Trump’s aggressive electoral rhetoric, the stage is set for a turbulent few years between the U.S. and China. For the time being, the Trump bump should be navigated by the international community by focusing on the administration’s actual policy decisions, or lack of, rather than what President Trump tweets.