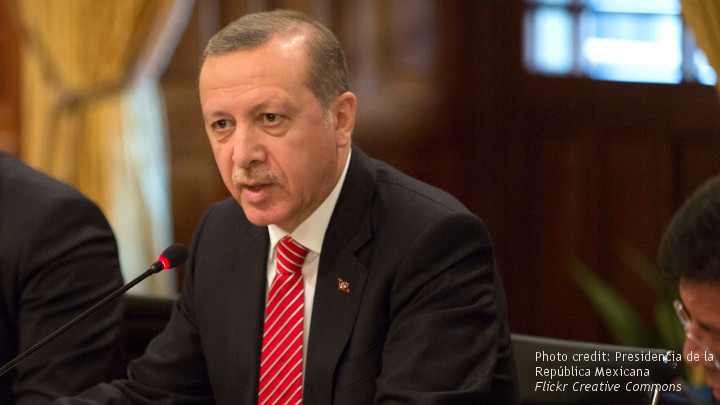 The rapid depreciation in the value of the Turkish Lira since the beginning of 2018 is the product not only of the collapse of any remaining vestiges of investor confidence in the regime of President Recep Tayyip Erdoğan but a symptom of the failure of the ruling Justice and Development Party (AKP) to address the long-standing structural vulnerabilities of the Turkish economy.

When the AKP first took office in November 2002, the Turkish economy was already rebounding from the currency collapse of February 2001 and subsequent sharp recession. The Economic Stabilization Program that the outgoing administration had drafted with the IMF, and which was backed by $32 billion in loans from the IMF and World Bank, had steadied the Turkish Lira, reduced inflation and led to an overhaul of the country’s previously poorly regulated banking sector. Turkey’s Gross Domestic Product (GDP) had returned to growth in the first quarter of 2002. It was still growing at the time of the November 2002 general election. But the recovery came too late – and, from the perspective of the electorate, was still insufficiently tangible – to save the most recent of the succession of corrupt and incompetent coalition governments whose policies had led to the crisis. Indeed, none of the parties which had been represented in the previous parliament was able to win any seats in the new assembly. The AKP, which had been founded just 15 months earlier, swept to power with a huge parliamentary majority, making it Turkey’s first single-party government in over a decade.

Erdoğan’s appetite for confrontation is a relatively recent phenomenon. During the AKP’s first years in office, when he still feared being ousted by the country’s staunchly Kemalist military, Erdoğan was canny and cautious rather than courageous, hurriedly backing down whenever he feared that the generals might move against him. He also sought protection from abroad by courting the U.S. – which was anxiously looking for “moderate” Muslim allies to refute accusations that its “War on Terror” was anti-Islamic – and the EU, where many naively confused Erdoğan’s known opposition to the Turkish military with a commitment to democratic values. Inside Turkey, he formed a close alliance with the then powerful Gülen Movement and courted Turkey’s ostensibly left-leaning intellectual elite, playing to their vanity and beguiling them with engagement and access to the public domain – with the result that both they and the Gülenists used their foreign language skills to lobby on his behalf. Most importantly, Erdoğan understood that the key to remaining in power long enough to enable the AKP to root itself in the apparatus of state lay in focusing on the same issue that had brought the party to power, namely the economy.

Although the AKP did not instigate the recovery from the 2001 economic crisis, it did nurture it. Erdoğan delegated much of the management of the economy to some of the more capable members of his cabinet, most notably Economy Minister Ali Babacan, and continued to implement the IMF-drafted Economic Stabilization Program, while vigorously courting foreign investors. When combined with the positive image that Erdoğan now enjoyed in Western capitals, the result was an unprecedented inflow of foreign funds into Turkey – including both foreign direct investment (FDI) and portfolio investments.

Through the 1990s, successive Turkish governments had tried to finance a spiraling budget deficit by offering huge real returns on Treasury bills and bonds, which became the main source of revenue for Turkish banks – and, through repurchase (repo) agreements, many individuals and corporations as well. The austerity measures introduced after the 2001 crisis effectively put an end to the practice and forced banks to focus on generating revenue from other sources, such as expanding their loan portfolios. Although there were still occasional political tensions between the AKP and the state establishment, the economic recovery gradually began to make itself felt in people’s daily lives. Interest and inflation rates fell. The Turkish Lira stabilized. Critically, the increased availability of credit – whether in the form of bank loans or credit cards – joined with growing optimism about their own and their country’s economic prospects to fuel a massive increase in borrowing.

In spring 2007, under pressure from his more resolute colleagues, Abdullah Gül and Bülent Arınç, a still hesitant Erdoğan reluctantly agreed to defy pressure from the military to abandon his plans to appoint Gül to the presidency and called an early general election. The AKP won the election with a landslide, and demonstrated what the generals already privately knew, namely that the era of military tutelage was finally over. But, ultimately, what decided the election was not the issue of civil-military relations – although this played a role – or foreign policy successes such as opening accession negotiations with the EU, but the AKP’s economic record. Since taking office, the government had not only made many voters feel wealthier but had given them hope of even better times to come. In contrast, the election campaigns of the opposition parties were characterized by strident scaremongering and did little to convince even many of their own supporters that they were better able than the AKP to manage the country’s economy.

As the AKP consolidated its grip on power, including winning a third term in June 2011, Erdoğan grew in confidence, becoming more ideologically assertive and repressive. He also became more autocratic, gradually shedding the allies he had cultivated during his first years in office and becoming increasingly enveloped in the personality cult that has been inflated around him. But, with the exception of a sharp downturn as a result of the 2007-2008 economic crisis, the economy continued to grow. Even though Erdoğan’s international reputation first faltered and then collapsed during the 2013 Gezi Park Protests, his administration was still widely regarded both inside and outside the country as being business friendly. But the warning signs were there. In fact, just as with Erdoğan’s descent into authoritarianism, they had always been there.

The Turkish economy’s current acute vulnerability to changes in international investor sentiment is a direct result of Erdoğan’s simplistic obsession with high growth rates and his failure to address the economy’s structural weaknesses – and has been exacerbated by Erdoğan’s increasing domination of economic policymaking. Turkey has a chronically low savings rate. Much of the economic growth of recent years has been the result of increased consumption, as Erdoğan has encouraged Turks to spend rather than save. Savings have continued to decline, while borrowing has increased. Debt repayments now account for over half of the average household’s disposable income, a tenfold increase on the proportion when the AKP first took office in 2002.

Unlike in other countries with high rates of indebtedness, Turkish household debt is mostly very short-term, such as in credit cards or short-term bank loans to cover people’s daily needs. Turkey’s low savings rate has meant that, ultimately, a large proportion of this borrowing is being funded not by domestic bank deposits but by the banks borrowing from abroad. Turkish companies have also increased their borrowing. Although the AKP has reduced government debt as a proportion of GDP to less than half the rate when it first took office, the debts of private companies as a proportion of GDP have risen almost fourfold over the same period. In recent years, there has also been an increase in Turkish companies borrowing directly from abroad in foreign currency, including many whose only revenue is in Turkish Lira – leaving them highly vulnerable to any downturn in the exchange rate.

Nor, despite the strong growth in exports since 2002, has the AKP succeeded in closing Turkey’s large foreign trade deficit. On the contrary, its policies have widened it. Not only has consumption-driven growth increased demand for imported consumer goods but Turkish industry is heavily dependent on imported raw materials and semi-finished products – while Turkey also imports almost all of its oil and natural gas. As a result, the potential benefits to Turkish exporters of the recent depreciation of the Turkish Lira will be largely offset by an increase in their costs.

CONCLUSIONS: In recent years, as Erdoğan’s international reputation has plummeted, the flow of fresh FDI into Turkey has rapidly declined, not least because of concerns about domestic political turbulence and the steady erosion of any semblance of the rule of law. But initially, and amid what at the time was a greater willingness to invest in emerging markets, foreign fund managers appeared relatively unfazed. Curiously, although international investors are frequently indifferent to human rights abuses in the countries in which they invest, they were also unconcerned by Erdoğan’s increasing suppression of freedom of expression – even though they are reliant on the free flow of accurate information for investment decisions; and, particularly from mid-2016 onwards, analysts at banks and brokerage houses in Turkey had begun doctoring their economic reports and forecasts for fear of incurring Erdoğan’s wrath. But during a disastrous visit to London in May 2018, Erdoğan managed to convince the financial community there not only that he was ill-equipped to manage the Turkish economy but that he did not even understand how a modern economy works.

Inside Turkey, and in contrast to the AKP’s first years in office, Erdoğan has now made his political survival dependent on fear rather than hope, inculcating a siege mentality amongst his followers and disseminating absurd – if widely believed – xenophobic conspiracy theories. When combined with the uncertainty and sense of crisis inherent in the perpetuation of the now two-year-old State of Emergency, the result has been to create an environment which is far from conducive to investment. Indeed, although companies are still taking loans from banks, it is increasingly to restructure their existing debts or meet their operating costs rather than expand or create something new.

Despite his claims to the contrary, Erdoğan’s decision to hold snap presidential and parliamentary elections on June 24 was in itself a tacit acknowledgement that the economic situation is likely to deteriorate sharply over the next 18 months and that he was not confident of victory if the elections were held on time in November 2019. Nor, if Erdoğan and the AKP win, is there a prospect of the introduction of long-overdue structural reforms. Instead, Erdoğan is likely to try to postpone the coming economic downturn in the run-up to the local elections that are scheduled for March 2019 and – as he has done before the elections on June 24 – introduce a raft of short-term populist measures that will make the eventual economic landing even harder than it was already going to be. Neither can Erdoğan expect significant assistance from foreign investors, whose confidence, once lost, is extremely difficult to regain.

But a defeat for Erdoğan and the AKP on June 24 would not necessarily trigger a substantial influx of foreign funds into Turkey, as many investors would be likely to wait and see how the new government performed before committing themselves. Consequently, from the opposition’s perspective, there would be a risk that – just as the AKP took the credit for inheriting an economic recovery – they would be held responsible by Turkish voters for the economic decline bequeathed them by the Erdoğan regime.

This article was originally published at the Turkey Analyst. Find it here.