India and the Quad in America’s New National Defense Strategy 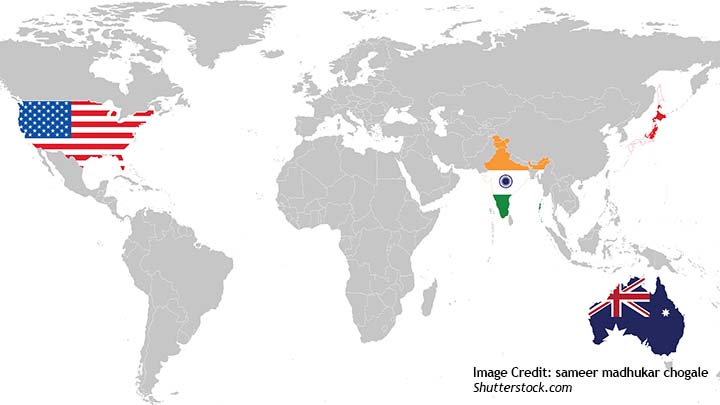 This article was originally posted on the Japan Forum for Strategic Studies (JFSS) website, you can find the article here.

The US Department of Defense issued the new National Defense Strategy (NDS) on October 27, 2022, along with its Nuclear Posture Review and Missile Defense Review. The previous NDS was published in 2018 under the Donald Trump administration. This release follows the publication of, earlier in October, the new National Security Strategy (NSS). Unsurprisingly, the NDS has focused on the ‘China challenge’ that the US faces, more clearly stated as compared to previous NDS’. Amidst this recognition in the premier defense planning document of the country, what role do the US’ partners and allies in the Indo-Pacific play in managing China, particularly that of the Quad countries?

The continued emphasis on China Challenge

The NDS identifies China as the US’ most significant “pacing challenge” and describes it as the sole competitor with the “intent and increasingly, the capabilities to systematically challenge the US.” The strategy identifies four key areas that the Department of Defense must focus on in order to enhance deterrence. These priorities are namely; defending the US from the evolving multi-domain threat posed by the PRC; deterring strategic attacks against the US, Allies and their partners; deterring aggression while being ready to win in conflict when necessary – prioritizing the PRC threat in the Indo-Pacific region over the Russia problem in Europe; and building a resilient Joint Force and defence ecosystem.

The Biden administration has continued to recognise China as the biggest geopolitical threat to the US, but the attention upon defence has altered to include both domestic threats from the PRC and regional challenges in the Indo-Pacific. The NSS emphasises the “PRC’s coercive and increasingly aggressive endeavour to refashion the Indo-Pacific region and the international system to suit its interests and authoritarian preferences”.

Responding to the release, the Chinese Defence Ministry has reacted by calling the NDS a tactic that “smears China’s normal military development” and builds on the “threat-driven argument of the US National Security Strategy”. The shift in strategy’s emphasis from military crises in the Indo-Pacific or Europe to homeland defence risks posed by Russia and China demonstrates an emphasis that addresses internal political weaknesses in conjunction to those of the army and key infrastructure. The disclosure will encourage Chinese responses, including pointed PLAN exercises, particularly with regional US allies and partners.

The Biden administration has repeatedly emphasized the Quad’s importance, growing more reliant on the group’s collaboration to combat China’s competitiveness. As a result, the NDS also refers to increased cooperation with each Quad power in the areas of technology, military, and information sharing. The US seeks to “modernize our Alliance with Japan and strengthen combined capabilities by aligning strategic planning and priorities in a more integrated manner”. This phraseology is significant and intriguing as Japan itself recently indicated a change in how it sees itself and it place in the region through its own NSS. This suggests that the US view of Japan’s position has undergone a deeper and more fundamental change. It is also notable as it is the first nation named in the NDS, appearing a total of seven times.

Regarding Australia, the strategy expresses a desire to elevate investments towards the alliance while highlighting AUKUS’s merits. Thus, Canberra is now playing a substantial part, according to Washington’s strategic calculations, as a result of its crucial involvement in the AUKUS and the Quad, which are crucial to US interests. Last but not least, India is mentioned in relation to expanding Partnership’s advancement, specifically to strengthen New Delhi’s capacities for fostering maritime stability in the Indian Ocean Region and countering PRC aggression. The focus on India –which is only mentioned once –appears focused solely in relation to China, instead of an individual recognition as a noteworthy defence partner which Delhi would have otherwise appreciated.

Importance of the Quad Partnership and India

So why does the US want to focus on partners and allies? Washington views them as their ‘greatest global strategic advantage’ which can ‘strengthen the major regional security architectures’, particularly where the US is in  competition with rivals. In the Indo-Pacific, technology is heavily signified as a central area of competition and so the US has a strong interest in promoting these goals through multi and minilateral groupings and collaborative operations to foster ‘collective capacity’ in the region and build up capabilities against China, especially to catch-up to Beijing’s rapid technological advances. Nevertheless, in order to achieve this, the US and their allies will first need to overcome some barriers that are hindering full information sharing and technological cooperation to capitalize on their potential shared abilities.

Senior US Defense officials have stated that their allies were consulted in the process of building the NDS, as they aimed to understand and incorporate many views of the security environment. The strategy offers US support for allies and partners in the Indo-Pacific to ‘address  grey-zone coercion’ from the PRC, be it over disputed waters or the China-India border. This has led to several analyses that suggest the strategy will be ‘well-received’ by Indo-Pacific allies, with many reassured by the statements and commitments made by Washington. As such, the US may therefore be correct in its assumption that the Quad members increasingly view the security environment very similarly to the US.

For India, the shared border with China continues to be a point of much anxiety with the ongoing stand-off, suggesting then an appreciation that the US also views China as an important geopolitical challenge and primary threat. This is likely driving their ongoing shared military drills and interoperability moves. For Japan, China means similar geo-political challenges, especially over regional flashpoints like Taiwan and the South China Sea where Tokyo would no doubt be brought into conflict through its alliance with the US if tensions escalated to that point. Australia too views itself in the midst of a ‘grey-zone conflict’ with China. Thus, it is clear that overall, the Quad partners are eager for US engagement and the leveraging of allies and partnership in the Indo-Pacific because they too share concerns over the security environment and wish to harness shared abilities to counter China. Nonetheless, there has been some criticism that the new NDS is overly combative and demonstrates that the US is not only preparing for a prospective conflict but that is also sees itself as already being in active confrontation with the PRC. In fact, while prioritizing strengthening partners, the NDS is simultaneously heavily acerbic and exclusionary of China. As such, it could actually be seen as sustaining the extremely unstable world that it accuses China of, and splitting the region into two camps. Therefore, it is important to consider Beijing’s response, particularly in the context of military and technical development, in addition to whether the Quad partners genuinely favour this combative stance. How explicitly the Quad is, or should be, a grouping to oppose the PRC has been a point of debate for the Quad for some time, and Washington now seems to have supplied an answer.

However, a look at the domestic politics of the partners would indicate that there are concerns with this strategic approach. Many politicians continue to believe that a conciliatory, appeasement-focused policy towards China is more appropriate in order to avoid jeopardizing their relationships with Beijing, which are crucial for their economies. Beijing believes that the Quad and its dedication to the “rules-based order” reduce it to the status of a “tool” in Washington’s strategy for enhancing the US’ global clout. Lastly, concerns have also frequently been voiced about the purpose of the Quad, and the NDS undoubtedly pushes for the Quad to be seen as a security coalition that will be used to advance US objectives in the region. As a result, it can draw criticism that the coalition is not exactly the “force for good” that focuses on delivering public goods and countering unconventional security threats as the Quad frequently portrays itself as.