Renewable Energy and Climate Action: The Future of Japan and Sweden Cooperation 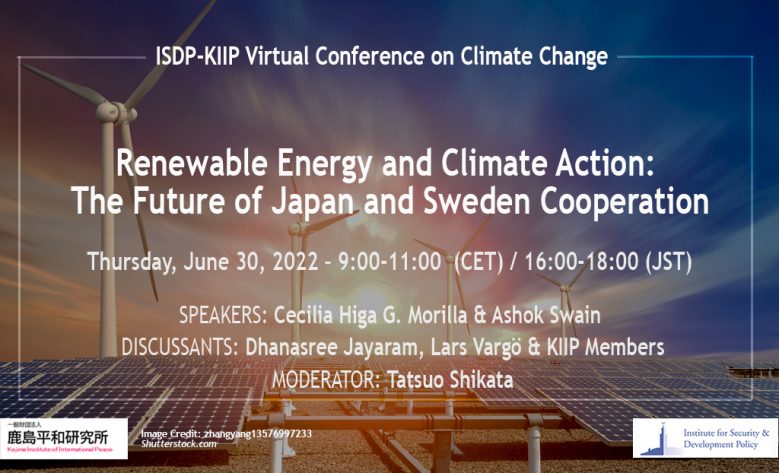 Did you miss this webinar? The full recording is available on ISDP’s YouTube channel.

Climate Change is one of the most pressing challenges in the world today, affecting every aspect of our planet. The effects are exceedingly visible across the globe – shrinking water supplies and shifting weather patterns that impose implications on food production to name a few. Thus it is one of the biggest security threats facing the world’s population. Therefore, the need for joint action to tackle Climate Change is urgent.

As such, the Stockholm Centre for South Asian and Indo-Pacific Affairs of ISDP is conducting a research project with Kajima Institute for International Peace (KIIP) in Japan on Climate Cooperation between Japan and Sweden. As a part of this research project, the SCSA-IPA is hosting an online seminar with KIIP on June 30, 2022.

This online event will have two-hour sessions analyzing the critical issues and opportunities involving Climate Change and Renewable Energy policies in Sweden and discuss the medium of cooperation between Japan and Sweden.

Professor Ashok Swain on “Hydro-Technology, Renewable Energy and the Swedish Future Generations by 2050

Ashok Swain is a Professor and Head of Department of Peace and Conflict Research and UNESCO Chair of International Water Cooperation at Uppsala University, Sweden. Swain received his Ph.D. from the Jawaharlal Nehru University, New Delhi, in 1991, and since then, he has been teaching at Uppsala University. Swain has written extensively on new security challenges, international water sharing, environment, conflict and peace, and democratic development issues. He has also worked as a consultant on environment, water, and development issues for various UN agencies, OSCE, NATO, EU, IISS, Arab League, OXFAM, Governments of Sweden, Netherlands, UK, and Singapore

Dr. Cecilia Higa on “Bioenergy in Sweden and the best practice case of Stockholm Exergi”

Dr. Cecilia Higa G. Morilla is a Project Manager at Svenska Bioenergiföreningen (Sweden), which is a strong trade-organisation and boutique-consultancy, focused on clean energy. She manages projects on energy policy, sustainability and bioenergy, among other topics, together with universities, agencies, companies and consultancies, in Sweden and abroad. In addition to that, Cecilia is a National Teal Leader (NTL) for Sweden at IEA Bioenergy Task 44: Flexible Bioenergy and System Integration. Finally, Cecilia has a Ph.D. in Energy System Planning and an MBA in Business and Strategic Planning. Occasionally, she is a lecturer on energy policy topics at KTH.

Dr. Dhanasree Jayaram is a Research Fellow at the Centre Marc Bloch (CMB) and a Researcher at Freie Universität Berlin – under the Alexander von Humboldt Foundation’s International Climate Protection Fellowship 2022-23. Dr. Dhanasree Jayaram is an Assistant Professor, Department of Geopolitics and International Relations, and Co-coordinator, Centre for Climate Studies, Manipal Academy of Higher Education (MAHE), Karnataka, India. She is also a Research Fellow, Earth System Governance; Member, Climate Security Expert Network; and Member, Planet Politics Institute. She holds a PhD in Geopolitics and International Relations from MAHE. She pursued a visiting fellowship (Erasmus Mundus – short-term PhD) at Leiden University, the Netherlands during 2014-15; and a postdoctoral fellowship at the University of Lausanne, Switzerland, under the Swiss Government Excellence Scholarship during 2018-19. She managed a project of adelphi (Berlin) on “Climate Diplomacy”, sponsored by the German Federal Foreign Office during 2015-20. She is the author of “Breaking out of the Green House: Indian Leadership in Times of Environmental Change” (2012), and “Climate Diplomacy and Emerging Economies: India as a Case Study” (2021).

Dr. Lars Vargö, the Head of ISDP’s Stockholm Japan Center, is a former Swedish Ambassador to Japan (2011-14) and South Korea (2006-11). He holds a Ph.D. in Japanese studies (history) from the University of Stockholm (1982). He graduated from Uppsala University 1972 with a major in sinology. In 1972-76 he was a repeat Mombusho scholar at Kyoto University. As a diplomat Vargö has returned to Japan four times, but has also served in Libya, Lithuania and the United States. 2001-2005 he served as Ambassador and Head of the International Department of the Swedish Parliament.