Braced for War – Current Tensions on the Korean Peninsula 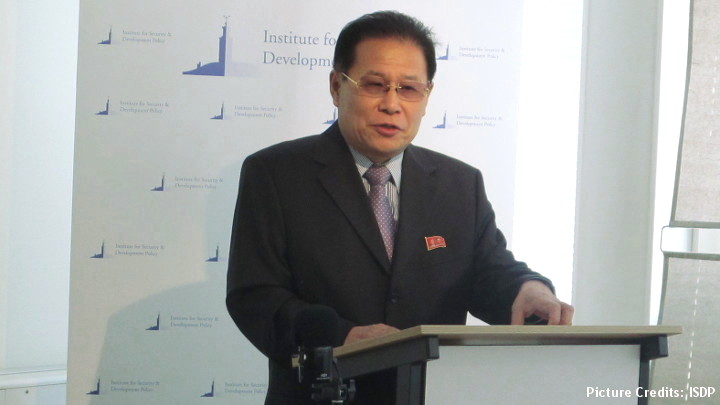 On April 21, 2017, the Institute for Security and Development Policy welcomed Ambassador Kang Yong Dok, Ambassador of the DPRK to Sweden, for a presentation on DPRK’s view on the escalating tensions on the Korean Peninsula. The event was moderated by Dr. Niklas Swanström, Director of ISDP.

The event consisted firstly of a statement read by the Ambassador giving the DPRK’s official stance on the current crises on the Korean peninsula and then, a Q&A session.

Below is a transcript of a selected portion of the Q&A session. Please watch the video for the full event.

What would it take to remove the nuclear issue?

The root cause of the escalating tension on the Korean peninsula is the US nuclear threat to the DPRK and the joint military exercises, sanctions and other moves to stifle the DPRK and push the situation to the brink of clash of nuclear weapons. The current situation on the Korean peninsula is due to the US’s Anti-DPRK policy and their nuclear threat to the DPRK.

The nuclear issue on the Korean peninsula originated from the US’s nuclear threat to the DPRK. The US deployed nuclear weapons to South Korea after the Korean war in 1953. From that time, the US officially listed the DPRK as its nuclear target and threatened my country by those nuclear weapons, resorting to serious economic and political pressure upon us. At the same time, the US made practical preparations to attack the DPRK through use of those weapons and different ways.

The US has a chosen purpose and target to fiscally eliminate the DPRK. As I mentioned, the US’s nuclear threat and anti-DPRK policy have already gone beyond the limit of tolerance. Under such circumstances there is no alternative but for the DPRK to develop nuclear weapons for self-defense.

History shows that no matter how fair and just one may be, one is bound to fall victims to big powers. As weak states are bound to fall victim of stronger states, the DPRK cannot give up its nuclear steps until the US takes steps back by stopping the military exercises in South Korea and roots out its nuclear threat to DPRK and rolls back its anti-DPRK policy. Moreover, UNSC resolutions and sanctions should be impartial, objective, and respectful of every state’s sovereignty. So far, the UNSC has long been disqualified to take issue with DPRK nuclear test and missile launches as it has gone to the extreme in its application of double standards by which it prevents DPRK brands the DPRK tests illegal but keeps silent on the tests conducted by other countries including the United states. This is a clear double standard we cannot accept it so we absolutely resent the sanction resolutions against the DPRK. In this case, intercontinental ballistic missile we can launch anytime and anywhere determined by the supreme headquarters of the DPRK and the development of nuclear weapon and ICBM is the normal efforts of the DPRK for bolstering defense capability for self-defense to cope with danger of US military attack. The only way to de-escalate tensions on the Korea peninsular is to root out the US nuclear threat to DPRK and roll back US anti-DPRK policy.

In the event of war, how would the DPRK be able to face a strong opponent like the US?

The people of the DPRK are sure of victory in a standoff with the United States. The first reason is that the people of the DPRK hold in high esteem his excellency Kim Jong-Un as their respected supreme leader who is an iron brilliant commander. Secondly, the DPRK has single-hearted unity. This means that people the DPRK are united around their Supreme Leader, his excellency Kim-Jong-un, single-hearted unity is the bottom-line of the Korea society and single-hearted unity serves as the invincible sword for winning victory. Thirdly, the DPRK has built a strong military capability for nuclear attack and retaliation under the wise leadership of his excellency Kim Jong-Un. Fourthly, we have strong independent international economy for the last several decades, even under the severe sanctions imposed by the United States.

ISDP would like to thank Ambassador Kang Yong Dok for his participation in this event.